Camino del Norte: At Least You Can Do It!

My Work is Loving the World  Mary Oliver

Early in June, my husband Cam and I returned from an adventure in Europe.  We are walking El Camino del Norte, a route along the northern coast of Spain from east on the French border to the sacred city of Santiago de Compostela on the western tip, over 800 kilometers, and we, thus far, have hiked two one-week segments, the first segment two years ago and the second two months ago, have covered about 350 kilometers of our pilgrimage journey, carrying our clothes and essentials in packs on our backs and covering an average of 25 kilometers a day.  Hanging from a strap on my pack is a circular plastic tag that I had customed-made with a wide-winged peace dove and Mary Oliver’s words, “My Work is Loving the World” carved into its surface.  And that is my greatest intention on these pilgrimages across Spain, to soften my heart and spread my wings to this world I inhabit — that we all inhabit — to allow its gifts to soak in each day, to stay present to the moments.  And now, in a series of essays, I share a handful of these gifts with you.

I want to tell you that it was early on, before leaving the ground at our Marquette County Upper Peninsula airport on a Thursday afternoon, that a mantra for our El Camino pilgrimage became clear.  Sitting across the aisle from us on our small regional jet was a friend of my husband Cam’s, and, as Cam spoke to him of the monumental walking we were about to embark upon, sometimes over mountains, and often in the rolling hills along the northern coast of Spain, and always carrying packs on our backs filled with everything we were taking on this week-long journey, the friend replied in a chipper tone, “At least you can do it!”  These words stuck with me, and with Cam too, were etched in our minds from the moment the plane made its way down the runway and lifted us off into the wide wings of an overseas adventure.  Yes, at least we could do it, or believed in our hearts we could do it.  And isn’t that the most important thing, to believe something so fervently, so fully, that you know that it can be true?  And I knew this could be true, that Cam and I, two college kids who fell in love forty-five years ago, could do it.  It didn’t matter that we were now in our sixties, were grandparents who carried the scars of all these decades of full-body living.  It didn’t matter because the youthful vigor, the desire to challenge ourselves physically and spiritually, the excitement of opening to something new was as alive and fresh as it ever had been.

At least we can do it!  I said these words to myself, over and over, said them as we flew across the Atlantic on an overnight flight, said them as we paced the terminal at the Amsterdam airport for hours and hours the next day while waiting for our plane to Bilbao, the capital city of Basque Country, our end-point two years ago and starting point for this year’s trek, said them in the early evening as we were plunked out of a bus onto Bilbao’s busy city-center streets, and the next morning, backpacks strapped on tightly, said them again as we officially stepped out of our hotel and started following the Camino’s yellow arrow and scallop shell signs painted and tiled on buildings and sidewalks and telephone poles, followed the river and these arrows out of the city northbound toward the sea.  The Camino is a pilgrimage, with ancient roots, hundreds and hundreds of years old, that follows these arrows through countryside and towns and cities, along the many historic pathways across Europe and into Spain all leading toward the sacred city of Santiago de Compostela where the relics of St. James, one of Jesus’ twelve apostles, are housed in the city’s magnificent cathedral.  And Cam and I were on the path, on El Camino del Norte, the northern route to Santiago, and we felt it, something larger than any one religion or tradition, the way we were joined together with all those who have walked these pathways before us and with us now, something holy and good-feeling, something that was palpable in these bodies of ours.

And that’s what I want to talk about, these bodies of ours.  And our spirits.  Because I can’t separate the two.  It was a body experience, for sure, this walking on sidewalks along the river through the industrial and residential suburbs of Bilbao on that first morning, and it continued to be a body experience throughout the whole seven-day Camino journey, over one hundred miles of walking on goat paths and country roads, on old railroad grades, through fields and into cities and villages and resort towns, across sandy beaches onto rocky trails.  How can you not be present in your body when it is the vehicle carrying you forward?  How can you not feel the ground beneath you, whether hard and paved or rockbound and slippery or soft and grass-covered?  The moments are pressed into feet and shoulders, hips and thighs when you spend most of your day in movement.  And there were the packs slung across our backs.  We felt those packs on our shoulders and on our hips and middle backs, and it all required our attention, a tightening every now and then of the strap belted around our hips, a loosening of the one across the sternum, a shift here, a pull there in order to provide more comfort and ease.  Even in the discomfort, we felt it, the way our bodies were alive and eager and on board for this adventure.  And it was in these uncomfortable moments that our mantra became a handy reminder.  “At least we can do it!”  And when our walking feet, mine often in Teva flip flops, Cam’s in leather-bound hiking boots, found a bounce in their gait, when the packs slipped into place and our spines into alignment, that’s when we didn’t have to think about it, the way spirit infuses our bodies with a palpable vibrancy.  And that’s when we could relax our shoulders and our breath and settle even more fully into our bodies carrying us forward.  And that’s when our senses could open up to the feast of gifts along the way.

And what gifts there were!  It was springtime in northern Spain and the world, that first day, was washed fresh after an overnight rain, and it was all new to us, the river opening in a wide mouth to the sea, the sun breaking through morning clouds, the bus suspended by cables twenty feet above this river-mouth taking us across to the port city of Portegillete, the city band alive with music on a cobblestone side street, the bike path that took us up up up into the hills outside of town and westward twelve kilometers to the ocean again, to early evening blue sky and blue sea and a wide stretch of beach and silky warm sand on tired feet and a tiny village beyond where we spent that first night in an apartment overlooking the village square.  And along the way, it had been the smell of spring that my body had most savored.  It surprised me, how good it was to smell grass again after six months of cold frozen winter in Michigan’s Upper Peninsula.  Green grass and unfurled leaves had never smelled so good, and the sweetness of roses, and the musky smell of white blossoms on trimmed-back bushes, and honeysuckle.  There was honeysuckle.  It is the best to walk along the sea and smell the headiness of honeysuckle while eating a juicy clementine from the market in the port town you have just passed through.  And in the evening of that first day, as we traced the banks of a small tidal river to our village destination, there it was, with us still, the slight bounce in our tired gaits, and the mantra we had carried with us since leaving our home airport: “At least you can do it!”  Yes, indeed.  We can do it.  And today, we had, and it felt good. 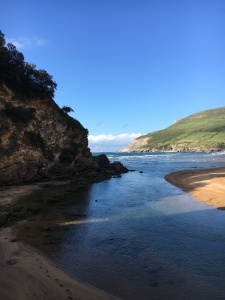 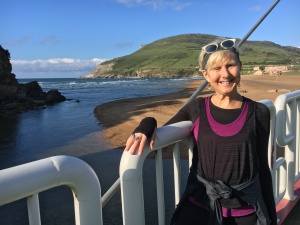 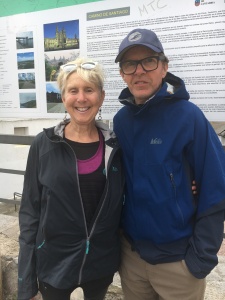 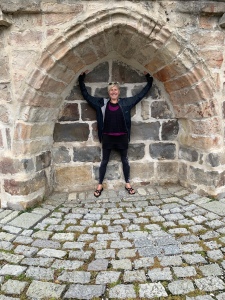 Photographs from the first two days, starting in the Basque city of Bilbao, passing by the Guggenheim, following the river to the ocean, staying in the village of Pobena the first night and the second night in the beach front city of Castro-Urdiales where we explored the medieval cathedral and ate fish stew and grilled octopus in a restaurant on a point by the sea.

Comments Off on Camino del Norte: At Least You Can Do It!

Camino del Norte: Be Nice To Your Husband