Out beyond ideas of wrong doing and right doing, there is a field.  I’ll meet you there.  Rumi

There is something special about walking the same stretch of trail day after day throughout the whole of a season.  That’s what I did this past summer, June through August.  Nearly every day, usually in the morning, I donned flip flops, or running shoes and set off on the rural two-track a mile west of my home in Michigan’s Upper Peninsula.  And there are gifts to behold in the comfortable familiarity of such a practice.  Most mornings, I could count on it, the heron that lit off, flapping its mighty wings over the first marsh on my left and the snowshoe rabbit who raced across the trail at rapid speed as I approached the one-mile mark.  There were the frogs basking in the sun and the ones hopping off into the thicket and the unfortunate ones squished by the occasional four-wheeler that shared the same trail.  Each day, I looked for the kingfisher perched on the bleached tree skeleton in the midst of a river bend and the plowed-down grasses where the beaver had dragged their branches to the water’s edge.  This trail became my comfortable friend, something to know intimately.

And there was the paradox, too.  Yes, there was the familiarity, the comfort in this daily ritual, but there also was the reminder that no day, no moment, no trail is ever the same.  The change is constant.  First, it was the dandelions blooming, and then the wild strawberries, and they gave way in July to the raspberries and blueberries. Blooms transformed into berries and daisies bowed down to Joe Pie Weed.  There were scorching sunny mornings and misty rains, gentle breezes and gale winds.  Twice a porcupine crossed my path and once a garter snake slithered in front of me.  There were warblers and woodpeckers, cedar waxwings and wood ducks.

And there were people too.  There were the occasional athletes flying by on fat-tire bikes and the young woman runner and the man my age with arm in a sling who walked at a rapid clip.  And there was the man with the mustache and the young spaniel who owned the pick-up truck.  Many mornings, I met him in passing.  And this is what I want to tell you; it has to do with the paradox and change and connection.  The first time I saw his pick-up, I flinched.  And I put him, even before setting eyes on his puppy and his face, into a box.  And I put myself into a box as well.  The bumper of his truck was plastered in stickers, messages that shouted out that we were on different teams, different sides of a country and world polarized.  I didn’t feel welcome in his bumper sticker world, and I admit that I don’t think I was welcoming him either into my morning walk of a meditation.  And then we met, for the first time, his puppy wet and mucky and eager to bound in my direction.  He held his dog tight and our hello felt curt.  Or perhaps it was my imagination because as the days and weeks flew by and June turned into July, our smiles became warmer as we passed each other on the trail.

One morning, a cloudy still day during blueberry season, I ran into him as I made my west and he was making his way back east.  For the first time, our hellos evolved into conversation, a conversation that he initiated.  He’d seen a bear, he said, up by the power lines where he had been blueberry picking.  His puppy had wanted to chase it.  The man with the mustache was lit up.  I was lit up too.  We were two people who weren’t afraid of seeing a bear, two people excited about the wild.  We were on common ground.  And this was the beginning of something special.  I found myself looking forward to our encounters, hoping I’d see him on my morning jaunts.  He flushed a covey of partridge.  I spied teal by the third bridge.  We shared our nature sitings.  We became friends, trail friends, out beyond the boxes that we so easily put ourselves into.  One of the last times that we passed each other, he’d done it again, seen three of them this time, a mother bear and two cubs, and he wanted me to know.  I was someone who would appreciate such excitement.  And he was someone who I could count on.  And I was someone who he could count on as well.  I felt it.  We would help each other out if need be.  We cared.  And isn’t that what it’s all about?!?

I haven’t seen my friend with the mustache lately.  I stopped my daily ritual in September, traveling instead to other places, other trails.  And I have to say I’m glad to be thinking of my summer practice again, and of him, the man with the mustache.  His smile is genuine.  His demeanor sincere.  And our friendship cordial.  I want to bring this cordiality, this sincerity into all my encounters.  It is easy to get caught up in the polarity, the vicious energy of tribal teams on opposite sides of what seems like an impossible cavern to cross.  But I’m here to tell you that the Persian poet Rumi is on to something.  There is a field or a trail or a workplace or a home where we can meet, out beyond ideas of wrong-doing or right-doing where there is indeed common ground.  My friend with the mustache and the puppy and I found it this past summer, and I am grateful. 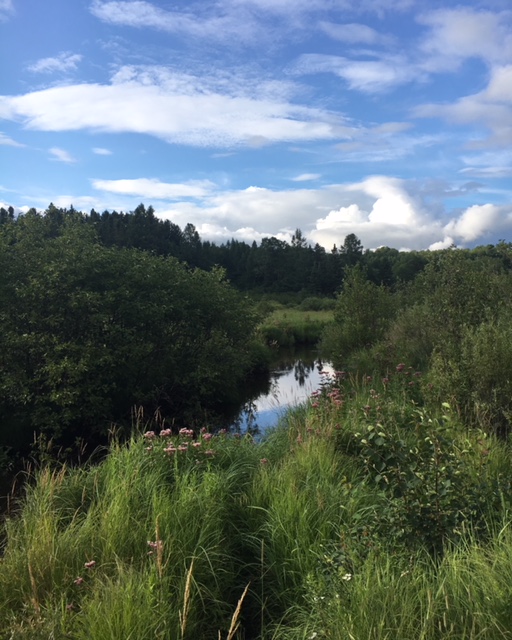 On the Trail: Ishpeming, Michigan, Summer, 2018

Comments Off on On the Trail