The perfect creative stance is satisfaction where I am and eagerness for more.  Abraham-Hicks

It was the weekend after Fourth of July, a Saturday evening, and the sun had just dipped over the horizon as the plane sped down the runway in Minneapolis, on this, the third leg of my travel adventure to Moscow, Idaho.  And then, just like that, the plane was airborne, its nose pointing skyward before leveling off on this perfectly-clear night and offering us, the packed-in passengers, a wide-angled view of the Twin Cities, the Mississippi, and something else, something wonderfully unexpected . . . Fireworks!!!  I couldn’t believe my good fortune!  A week earlier, my husband Cam and I had joined our son, daughter-in-law and two-year-old grandson Viren at dusk on a grassy field for our local display of fireworks, and the two of us, who hadn’t witnessed Fourth of July fireworks in years, oohed and ahhed and traced the bursting and blossoming fountains of sky-shooting color with our fingers with as much delight as our toddler grandson.  And now here they were again, first flower-shaped and large — and then we were above them and I was looking down at bursts of color and then they were gone and we were on our way.

But that wasn’t the end of it.  As we, in our Boeing 737, sailed westward through the nighttime sky among the stars and a full round moon, the country below us remained clear of clouds, and each time that we passed a town of twinkling lights, in North Dakota and all through Montana and into northern Idaho, there they were, the tiny bonfire bursts, more and more and more of them — the country lit up with post-Fourth of July fun.  Just when I thought that it must be over, that there couldn’t possibly be more, it would happen again, the sudden explosion of light, tiny now, but big enough to make me happy.  It was nearly midnight when we landed in Spokane, Washington, too late for the boom boom boom of fireworks, but not too late for another display of wonder.  As I waited for my motel shuttle outside the Spokane Airport, I looked up into the warm summery sky and there it was, suspended in front of me, that full moon that also had followed me across the country, the biggest and roundest moon I’d ever seen, something else to ooh and ahh at, something else to appreciate

Grandson Viren doesn’t quite get it yet, that there is a full moon to admire when the fireworks are over, that a good night’s sleep after witnessing that full moon is like gold in our pockets, that the sunrise the next morning can fill a person with wonder.  He dives into his present moments with gusto.  A trip to the park is heaven on earth to Viren — the curvy slide and the fast straight one, the toddler swings and the swings made for bigger bottoms, the kid-sized dragon with the friendly eyes that rocks each time you climb on its back, the metal bars that are perfect for dangling.  Why would a guy who has just turned two want to go anywhere else?!?

During the week that I spent in Idaho this past month, as Viren’s parents took possession of their new home, as Viren’s aunt and uncle — our other son and daughter-in-law — drove into town and moved into their rental cottage, it was my “job” to hang out with the little guy.  And we had a blast, Viren and I, not only at that park with the rocking dragon, but downtown, dipping our feet, then our legs on the hot hot afternoons into the icy cold fountain at the town’s center square, and on a hike at Moscow Mountain picking thimbleberries and collecting feathers and stones, in the toy store playing with the well-equipped train set, at the Food Co-op eating scrambled eggs and slurping on the smoothie called “monkey”.   We had a blast, until it was time to go, time for the next thing to emerge.  Sometimes it worked to explain to Viren that we’d be back again and that it was going to be fun, this next adventure that we were pointing our noses toward.  Sometimes we’d just wave our goodbyes and call out in our sing-song voices, “See you later, alligator!”  And sometimes we wouldn’t.  Sometimes there was flailing, and crying, and full-out refusals to budge.  Sometimes it just wasn’t easy moving forward to the next display of fireworks.

And I get it, this not wanting a good thing to be over.  At the end of the eight days in Moscow, Idaho, I said my goodbyes to our sons and their wives and that beloved grandson of ours and I headed back through the Palouse Valley to the airport in Spokane to take off on the next leg of my adventure.  I didn’t flail and I didn’t cry and I didn’t throw myself down in a refusal to budge.  I kept on driving through those ambers waves of grain, but, as I moved forward, I could feel it, an inner resistance, maybe similar to the resistance that Viren feels.  Why would a gal want to be anywhere else but here in the northwest with her family?  I called husband Cam, who had flown home to Michigan’s Upper Peninsula the day before.  “We need to buy a cottage in Moscow!”  I exclaimed into the phone.  And I meant it.  And someday we probably will.  But as the day moved forward, I did as well.  I got on that plane from Spokane to Salt Lake, and the next one to Atlanta, and, finally, as the sun was setting over Georgia, onto the third plane that headed back north up the coast to Portland, Maine, and, in the wee hours of the morning, I climbed into another rental car and traced the coast northward to the peninsula I’ve known my whole life, to a cottage that was mine for the week just two miles from our family land.

And what a week it was!!!  The ocean was at my doorstep and the salt breeze blew in through open windows and I read a whole novel and I wrote with my friend Muriel and we swam in the river and I waded each day in the waves at the state park beach.  I ate dinners on the deck of the cottage with friends and family and we watched the changing sky and the sea birds and the boats bobbing on their moorings. And at the end of the week, Cam joined me and that was sweet sweet time too and my siblings came to town and we shared raucous meals and we laughed and the sea entered my bones and I relaxed in the way that I only relax when I’m by the sea in Maine.  And why would I ever want this to end?!?  When Cam and I closed the door to the cottage that last time and headed toward the airport, I could feel it again, the resistance to what’s next.  How could it possibly be as good?!?  How could there be another display of fireworks?!?

And now I’m home again, and yesterday, the air was sweet, the way it can only be sweet in the Upper Peninsula of Michigan, smelling of ferns and pine and the fresh fresh lake.  In the afternoon, Cam and I hiked the shoreline of Lake Superior from Wetmore Landing to Little Presque Isle under the tall red pines and on the sandy beach.  Cam dozed on a smooth bed of rock and I waded in the waves that were slapping the shore.  And, as I looked up into one of those pines that rise above the beach, an eagle lifted off and flew above me and I felt it, the ooh, the ahh.  There it was, something else to appreciate.  The fireworks just keep on coming!

Hanging out in downtown Moscow, Idaho; some of the family, July 2014 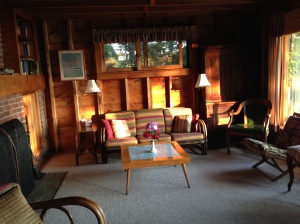 Comments Off on Fireworks

That “thing” at the bottom of your heart

Magic in the Moonlight