I could count on it, the mid-morning phone call from my mother on my birthday.  I don’t even remember when she started doing it, but throughout her eighties and into her early nineties, sometime between NPR’s Radio Reader and the morning music, the phone would ring, and I would know, I’d just know who was going to be on the other end.  “Happy Birthday,” she’d say in a voice more song than speech.  And as the years passed by and her words became more stroke-muddled and shaky, I’d think to myself, “Don’t take this for granted; this will probably be the last year.”  And I didn’t take her calls for granted; I savored each and every one of them.  Because, what can be more sacred on a birthday than a well-wish from the one who gave birth to you?

It was nearly two years ago now that my mother made her transition, so the phone call is no longer the obvious mode of birthday communication.  And this past Wednesday morning as I wiped the sleep from my eyes on my special day, as I scrambled around getting ready for a session of yoga, I remember thinking to myself, that, although I’m open and eager for a birthday wish from my mother, it wasn’t going to happen during that old familiar time of the day that we used to bless my birthday, that, at that magic hour when the music starts to play on Public Radio, I was going to be in the midst of forward bends and downward dogs and deep breath stretches.  And that’s what I was doing, reaching my arms behind my torso and clasping my hands together, knuckles pressed away from shoulders, heart blossoming open in yoga mudra, and I might have been saying these words, because I often say these words during a yoga session, “Be open to the gifts that appear at your doorstep.”  I might have been saying this as I guided us in stretching even deeper into this powerful heart-opener, might have been uttering these very words as the Joy Center door creaked open in the middle of a yoga class.

Who was this person who creaked the door open, who tried to sneak in with a class already in full swing, and no one expected to join us?  With hands still clasped behind my body and heart beaming forward, I stood up from mat and walked over to find out.  And it was my dear friend standing there in the hallway, dressed in her work clothes and holding a buoyant bag bursting with a fireworks of colorful tissue.  “Will you open it?!?” she said, bursting with that same fireworks of colorful enthusiasm.  And what could I say?!?  There it was — a gift that had appeared at my doorstep and my hands clasped behind me and my heart feeling open.  So I invited my friend in, right in the middle of the session, and we paused and sat down on our mats and I pulled out the tissue and peered into the bag of colorful goodies, a scarf in the deep coral color of a tropical flower, a mask with turquoise feathers, a dish towel for Joy Center, and something else wrapped in tissue at the very bottom of this birthday extravaganza.  It was deep red and glass and it was the perfect gift, and my friend, somehow she knew that it was her job to deliver it to me, this cardinal ornament, to deliver it at just the right time, just as NPR began its morning music.

It was a cardinal that came to me two years ago on a snowy morning a few days before my January birthday.  I was in the kitchen preparing breakfast and I might have been thinking about my mother, my mother lying in a hospital bed in Maine, her hip shattered, her lungs filling with fluid, her spirit ready to fly away.  I might have been thinking of flying myself, how my husband and I were about to leave for Maine to say our good-byes.  I’m not sure what I was thinking or if I was thinking at all as I glanced out the window into the white world of an Upper Peninsula winter and gasped.  Out loud I gasped at the shock of red, at the shock of a cardinal perched in our maple.  Cardinals don’t make their way to our north woods feeder.  They are my mother’s bird, a mid-caostal Maine bird, and, for years, it was my mother who found delight in the family of cardinals that nested by her cottage at Fish House Cove.  I called my mother that morning and thanked her for my birthday gift and I continued to thank her for the gift of the cardinal as I sat by her side two weeks later, gazing at the flock of cardinals that flitted and flew and perched on the pines and berry bushes outside her nursing home window, and weeks and months later, after my mother’s passing, as cardinals continued to show up in unexpected and magical ways.

So my mother came to me on my birthday morning this past Wednesday; at her usual time, she showed up.  And I’m appreciative beyond measure that I continue to connect with my mother in ways that are immediate and present in the present.  It was my mother who rode the waves of labor and pushed me out into this material world, this world of humming thrumming heart-breaking-open matter, and for that I’m beyond appreciative.  I love this world of matter, this world of glistening snow on a January morning, this world pulsating with song and side-splitting laughter and ocean-tasting tears, and I don’t want to shortchange it on my birthday.  Hooray for my mother who appears as a sweet glass cardinal.  And hooray for the messenger who brought me the cardinal.  For my friend who stood there at my doorstep bearing gifts.  Hooray for the gift of friendship, for phone messages and e-mails and well-wishing cards.  Hooray for a writing group that celebrated later in the afternoon and for the taste of chocolate, of many layers and textures of chocolate in a homemade cake, dancing on my tongue.  Hooray for the ability to dance and laugh and write and ski and play and, when the day is done, and the January full moon is peeking though a flurry of soft snow, to pause and to breathe and to soak it all in. 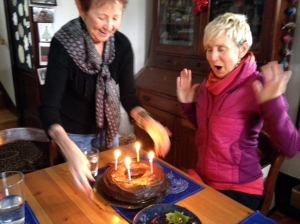 Comments Off on I’m so glad I was born!!!

The Best Day Ever!!!

The grace to begin beginning. . .