She wrapped the cove around her like a shawl. Genean Granger

Of course, begin with the cove.  It was my father who introduced my mother to the cove.  She was a Massachusetts girl who grew up roaming the woods by her childhood home in a suburb of Boston, who spent her summers prowling the long stretches of sandy beach at a relative’s New England cottage.  And it wasn’t until her mid-thirties, as a young widow with a toddler daughter and a son in kindergarten, that she met my father and found herself intoxicated not only with the man, but with the land.  My father’s father had bought this gem of a parcel of Maine coastline in 1903, the two coves, the point and spruce-covered forest between them and the old saltwater farmhouse and barn.  My parents honeymooned at the Old House and I imagine that this is where I was conceived.  And, for the next few summers, the farmhouse, a mossy path through a stretch of woods away from the beach and ocean, became their summer home, our summer home.  I don’t think my mother ever felt at ease in the Old House.  I’m not sure if it was too far from the sea or too entrenched in my father’s family history to feel right to my mother, but I heard her say it over and over, that the moment she saw Fish House Cove, on the other side of Sister Point, she felt like she never had before, like she was truly home.  And three years later, in 1959, that’s where my parents built the cottage, the cottage that would become my mother’s touchstone for the rest of her long life.

The cottage, nestled among the spruce trees at the cove’s head, became my mother’s haven.  She transplanted hens and chicken plants onto the rock ledges on one side, and peonies and irises and lilies into the garden overlooking the sea.  She hauled seaweed from the beach for fertilizer and grew chard and lettuces and tomatoes and peas.  She traipsed out onto the rocks that created the bowl of a cove and sketched, then painted with her watercolors, the dark green shadows and the sparkling light and the rust-colored rockweeds of low tide.  It’s not that she never left the calm waters of the cove.  She did.  She eagerly packed the picnic lunches for our Saturday escapades out into the open ocean in our big red boat to Wood Island or Spring Beach.  Her hair curled in the salt spray and her nose turned pink and she whooped when the waves flew over the side of the boat, just like the rest of us.  And for fifteen years, she lived out on the Point in the dream house that she designed with my father.  But the cove drew her back.  And the cottage, now ramshackle-renovated and not nearly as fancy as her bigger more modern house out on the rocks, somehow suited her.  I think it grounded her, my mother who was as deep and bountiful and moody as the sea.  I think it calmed her.  The osprey who landed atop the spruce in the morning and sometimes dove down into the mackerel-filled waters.  The heron who flew overhead at dusk.  The lap, lap, lap of the gentle waves at night.

My mother wrapped the cove around her like a shawl.  And she wrapped the cove around us, her children, as well.  She packed us bag lunches and sent us off and we scrounged the beach and explored the woods and hiked out to Sister Point, to the tide pools that became our swimming holes and the rock ledges that became our pretend houses, to the huckleberry bushes and the bayberry plants and the sea moss that we collected in our pails.  And then, after what seemed like hours, she’d ring us home again, with the brass antique school bell that hung by the cottage door.  And we’d leave the windy Point and the ocean breeze and we’d scurry back, barefooted and sunburned, to high tide and the cove’s calmer waters.  Some nights, maybe after a thunderstorm, maybe after a dinner of mackerel fish and fresh garden peas, if we were lucky, we’d have rhubarb crisp with hot lemon sauce for desert, and, on those nights, with filled bellies and sleepy eyes and salt-water skin, it was easy to feel it when we climbed into our bunks, the way our mother wrapped the cove around us like a shawl.

And I believe that, in some way, everyone, everyone who will gather in Maine on this summer Sunday so many years later, will feel it, the way she wrapped the cove around us all – her brother and sister-in-law, her old friends and cousins, her kids and grandkids and great grandkids, her nieces and nephews, her Hearthside Helpers, her neighbors, the fishermen who live nearby.  Maybe it was a painting that she gifted or an afternoon of flounder fishing together in the turquoise skiff or a quiet moment sitting on the deck with a pair of binoculars ready.  Maybe it was a dinner shared or a childhood weekend of cousins and aunts and uncles.  Maybe if we, the people gathered to celebrate my mother’s long life, close our eyes and breathe a little deeper, we can still sense it, the sea breeze, the water’s sparkle, the cry of the gulls, and something good and healthy and fresh cooking in the cottage’s small oven.   And maybe we can feel it, the smile in the air and the calmness that sinks down, way down into our bones. 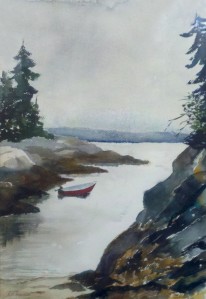 Comments Off on Mom

Blissed out with Viren