I had a magical moment the other night!  It was one of those flashes when a story, one that you’ve held dear for years, suddenly takes on new light and becomes even more precious.  It started a few days earlier, last Friday, during the seven-hour car-ride south to Grand Rapids.  Cam and I were going on a road trip, a weekend adventure to visit his mother in his downstate hometown.  And, along with the snacks and the bottled water, we tossed in the book we’ve been reading for months, Born To Run, by Christopher McDougal.  Our son, Peter, gave it to Cam last June for his birthday, and, once every week or two, we haul it out and read it at bedtime.  It’s been slow-going, not because the book is boring – it’s not! – but because when I read, in what I think is my most-affected listener-worthy voice, Cam immediately falls asleep, and, when Cam reads, I last about three pages and then I begin to drift off, with the sea-rocking lull of his voice in the background.  So, it took us over the Seney Stretch and along the northern shoreline of Lake Michigan to the Mackinaw Bridge before we caught up with what we had already read.

And it’s a good story we’ve been reading!  We’re only one-hundred pages into it, but now we’re captivated, and we’re clear about what’s been going on.  Christopher McDougal is a journalist and an avid distance runner, a runner who finds himself injured on a regular basis.  So, when he heard about this tribe of Indians who live hidden from the outside world in the caves and rocky floor of Mexico’s Copper Canyon and run with smiles on their faces for hundreds of miles at a time, without rest or injury, it became his personal quest to seek them out and discover their secrets.  And, that’s what he does, and, along the way, he meets other characters as well, in a story that weaves together his journey into this grander-than-the-Grand Canyon-canyon in Mexico with stories of ultra-runners who are racing their way over the harshest mountain peaks of North America, pushing their bodies to the limit.

As we headed south along I-75, I, the reader for the moment, was delighted to dip into a new chapter, with Cam, behind the wheel, alert and, not only paying attention to the straight stretch of highway, but also to the story that was unfolding like the spring leaves outside the car’s windows.  And, as I read, we were discovering our own magical synchronicities within its pages.  When McDougal is given a drink – Iskiate – by a local Indian to boost his energy as they climb up out of the canyon, I am thrilled to learn that it is made from chia seeds, the same kind of seeds that I brought back from my trip to Sedona this past November.  And according to McDougal, these little seeds, the ones that I’ve been throwing in my smoothies all winter, the ones that swell up in water like tapioca or tiny fish eggs, are a nutritional super-powerhouse of omega-3, omega-6, of calcium and zinc and iron.  “Wow!!!” Cam and I exclaimed, both vowing to step up our intake of Iskiate.  There were other synchronicities as well.  Many pages were devoted to a coach of a running team at a small college high up in the mountains of Colorado, the college where Peter has an interview in a week!  But it was the Indians, the Tarahumara, who run with light sandals on their feet and smiles on their faces that brought smiles to our faces.  Perhaps, if we felt the lightness in our bodies, perhaps if we touched our feet to the earth with the confidence of the Tarahumara, perhaps if we let go just a little of being so goal-oriented and found more joy in the running journey, we’d unleash it, too, this natural born runner within us.  At any rate, we liked them, the Tarahumara, these mystical joyous mysterious-to-us people and we wondered where this running story, this story of freedom and ease and joy, was going to take us next.

And it was Sunday in the early evening, after a Saturday filled with blossoming spring and sweet Mom time, that we found ourselves back up north in the Upper Peninsula, at the Co-op, scooping those tiny black seeds into a plastic bag.  My friend, Brian, was working.  “Brian,” I asked, “have you heard of chia seeds?”  Not only had he heard of chia seeds but he had tips on how to use them, and, Born to Run, it was a favorite book.  “It changed my life,” he said.  And I wondered how it was going to change mine.  Later, that evening, with our chia seeds soaking in water, and Cam fast asleep, I lay on the floor in the TV room, and my eyes, they just happened to wander over to the sill.  And that’s when I had my magical moment.

I don’t know what drew my attention in that direction.  Perhaps it was because we had spent the weekend with Cam’s mom.  But in the middle of the season premier of Mad Men, I found myself staring at the small pottery vase that has been a part of our lives for years.  It is simple red earth, in a simple rounded shape with one jagged white line painted around it, and I’ve loved it ever since . . . Then it dawned on me.  I’ve loved it ever since Cam’s parents brought it back.  It was their last extended organized trip before Dad died, more than a decade ago.  And as I stared in the pot’s direction, I remembered that part of the trip had been an adventure in Baja, that they had kayaked and had seen whales.  But there was more.  They also had taken a train ride through the Copper Canyon.  The Copper Canyon!  I’ve always said that this piece of pottery has good chi.  Many times, I’ve picked it up and run my fingers around its red barely-glazed surface.  And that’s what I did on Sunday night.  I picked it up.  And I noticed when I did that there was something tucked inside, something I have saved all these years, something that didn’t mean much to me until now.  Typed on a post-it note with Cam’s mother’s old typewriter were the words, “Hand-made in the Copper Canyon by the Tarahumara Indians.”

And something clicked inside of me.  And the pottery vase that has always been special suddenly became even more special because it was made by Indians who are now our friends, who are teaching Cam and I to smile as we read and smile as we run and that our limits are not really limits, and that boundless joy can carry us far. 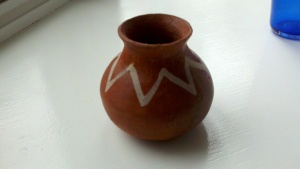 Comments Off on Born to Run